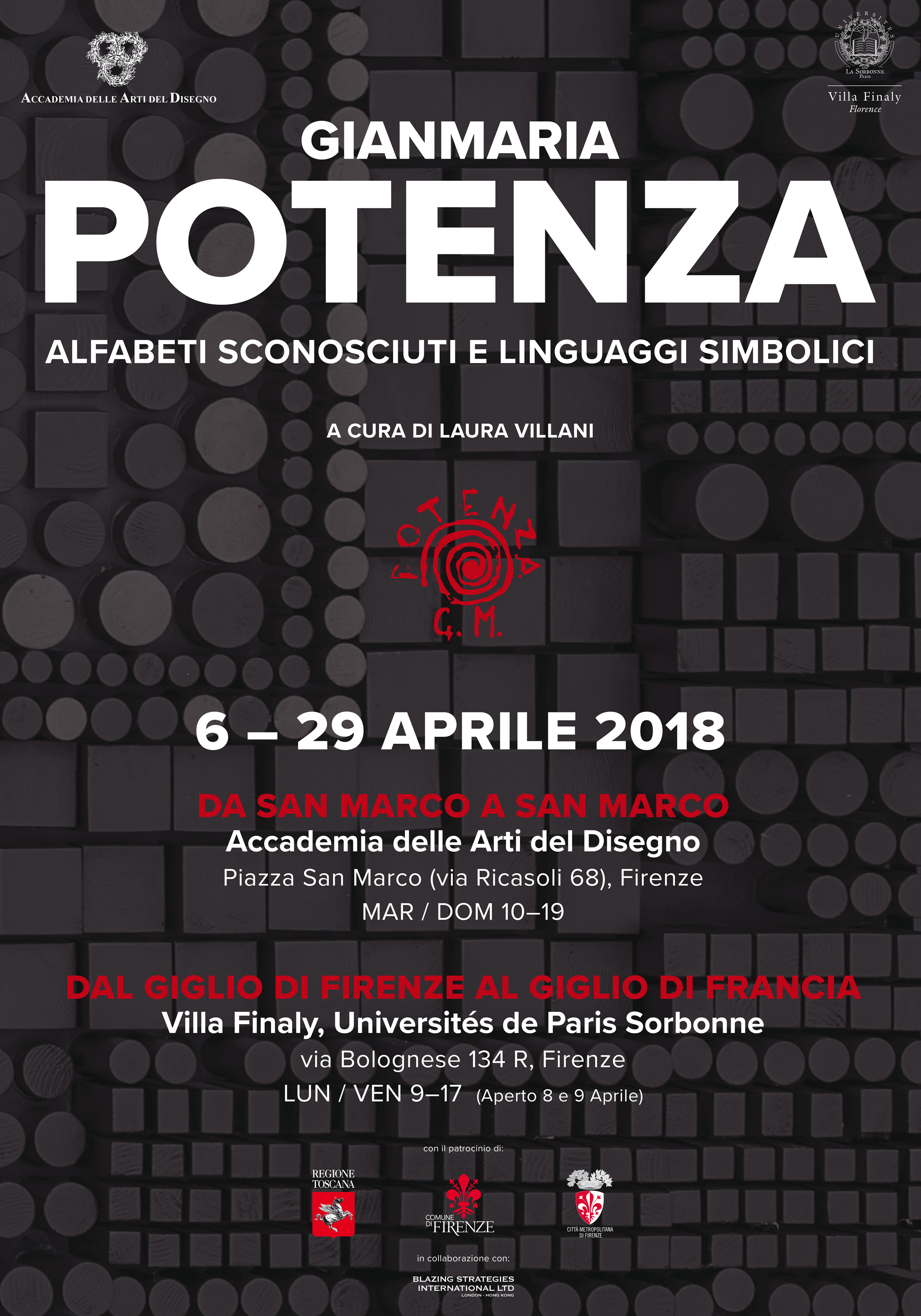 The Venetian artist Gianmaria Potenza will be in Florence from 6th – 29th April 2018, as the protagonist of a double exhibition curated by Laura Villani. The show will be held in two prestigious locations: the Accademia delle Arti del Disegno, which is the oldest academy in the world, founded by Cosimo de’ Medici in 1563, and Villa Finaly, the Florentine seat of the Sorbonne University of Paris. It will interpret the theme chosen by the curator – “Gianmaria Potenza, Unknown Alphabets and Symbolic Languages” – in different ways, responding to the exhibition setting.

The exhibition in Florence, which will open on 5th April 2018 and is set within the spaces of the Accademia delle Arti del Disegno and Villa Finaly, aims to offer the public a complex analysis of the artist’s works, providing visitors with the necessary tools to decipher the secrets of Gianmaria Potenza’s sculptures and the alphabet of signs that characterises the surface of his works. Through the use of universally-recognisable symbols, from the square to the circle, from the triangle to the rectangle, from the point to the spiral, Gianmaria Potenza creates a seemingly indecipherable alphabet, composed of symbols that can synthesise complex and absolute content within their forms, with an evocative value, often concatenated with an initiatory language that can even lead the observer to a metaphysical plain.

The exhibition’s journey begins with the show “From Saint Mark to Saint Mark”, hosted in the Exhibition Hall of the Accademia delle Arti del Disegno, in Via Ricasoli n.68 (Piazza San Marco corner) in Florence. It features monumental sculptures in bronze, characterised by shapes that are in one moment architectural and in the next naturalistic, located in the entrance portico, seeking a dialogue with the space that hosts them. On a grand scale, the calligraphic signs that decorate the surfaces of the sculptures, which, when they catch the light, re-evoke the sparkle of the Venetian waters, are immediately evident. Inside, within the exhibition hall, the visitor is confronted by the constant presence of symbols that also creep into the works made from marble and wood.

The show continues in Villa Finaly – Universités de Paris Sorbonne, in via Bolognese 134/R, with an exhibition characterised by light and named “From the Lily of Florence to the Lily of France”. Hosted in the Leonardo da Vinci hall, it is organised into a selection of mosaics and etchings on glass, and offers a parallel reading of the “unknown alphabets” of Gianmaria Potenza. If the alphabet that ripples on the surface of every element, even those which are two-dimensional, can sometimes be seen as the artist’s interpretation of the mosaic, where the sign takes the place of the mosaic fabric, it is with the use of mosaics and glass that Gianmaria Potenza becomes a messenger and successor of Byzantine culture, which is so present in Venice, reinterpreting it in a contemporary way. The fifteenth-century park of Villa Finaly offers a perfect place to read the alphabet of signs, lights and shadows, from the surfaces of bronze animals, a reinterpretation of the totems of the animal world and which the artist defines as “The Ark of Potenza”. At the centre of the Oval Hall another chromium-plated bronze will be exhibited: “The Library”, an homage by the Maestro to the setting that hosts it, a place of culture and academic research.

With the two Florentine exhibitions, Gianmaria Potenza pays homage to the city and the institutions that are hosting them, producing four previously-unseen works: two “Elaboratori”, consisting of wooden tables of various thickness that will be exhibited at the Accademia delle Arti del Disegno, one of which is dedicated to the winged lion of Saint Mark with the Gospel of the evangelist Mark, emblem of Venice, and the other of which is dedicated to the Marzocco lion, with a shield bearing the image of a lily, symbol of France; and two “Transparent Sculptures”, two grindstone etchings on sheets of industrial crystal, which will be exhibited at Villa Finaly, one of which is dedicated to the lily, symbol of Florence for almost one thousand years, and the other to the French lily, a symbol of French royalty, an element that links Florence and France, as the symbol consisting of three lilies was gifted by King Louis XI to Piero de’ Medici in 1465, who inserted it into his own emblem.